Pope Francis, Praise Be To You (Laudato Si’): On Care of Our Common Home (San Francisco: Ignatius Press, 2015).

Pope Francis took his appellation from Saint Francis of Assisi, a figure beloved not only by believers, but by rock stars and hippies. The medieval saint was a friend of animals and communed with God in creation. The reigning pontiff has devoted his first encyclical (the full text of which is available here) to the environmental crisis of the modern world, addressing the economic conquest of humanity which has left polluted air, contaminated water, deforestation, and extinction in its wake. Francis echoes and amplifies the warnings of all the previous popes since Saint John XXIII (1958-1963), and speaks out as the prophets of old warning ancient Israel to repent. 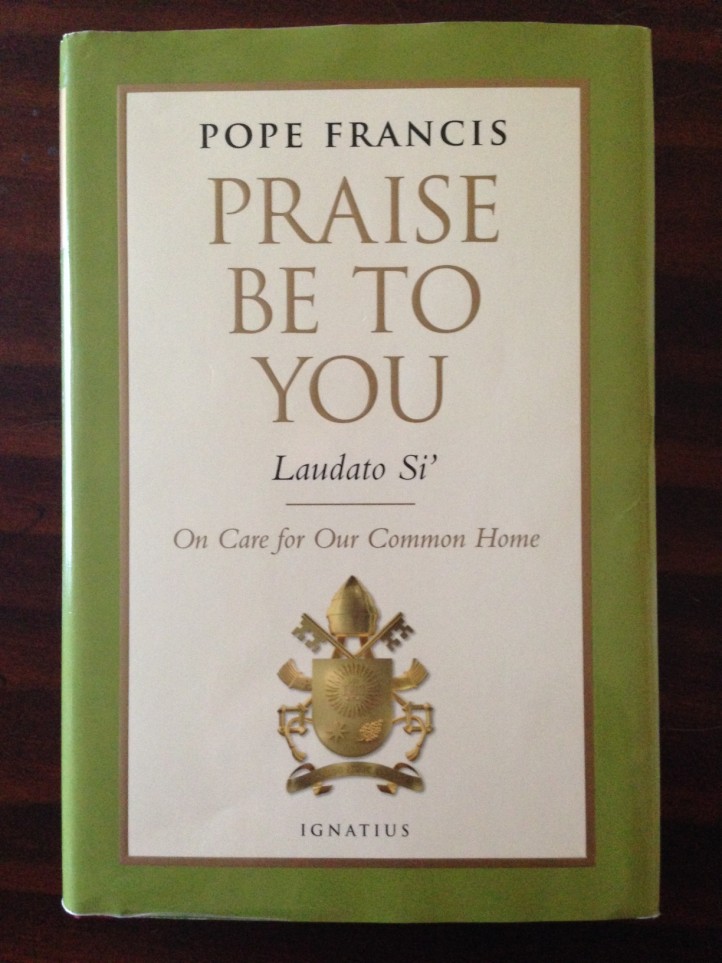 The Pope today addresses his epistle not only to the Catholic church but to the world, and embodies in his pen the “genuine and profound humanism” that he urges all to embrace in pursuit of a noble and generous society. Several of his comments reminded me of Schumacher (whom I suspect he, as many others, has read), such as those urging self-limitation and condemning the “technocratic paradigm” which promotes mechanized efficiency at the expense of human and environmental dignity. One of my favorites is this: “If architecture reflects the spirit of an age, our magestructures and drab apartment blocks express the spirit of globalized technology, where a constant flood of new products coexists with a tedious monotony.” He continues: “Let us refuse to resign ourselves to this and continue to wonder about the purpose and meaning of everything. Otherwise we would simply legitimate the present situation and need new forms of escapism to help us endure the emptiness.”

In a world of globalized technology which tends to compromise genuine community, create social alienation, and express itself in metropolitan expanses of asphalt, smog, and noise, the Pope commends those who positively overcome the isolation and ugliness, as through compassionate generosity and devotion to community. As an artist, I particularly appreciated the following line: “Liberation from the dominant technocratic paradigm does in fact happen sometimes, for example…when the desire to create and contemplate beauty manages to overcome the reductionism through a kind of salvation which occurs in beauty and in those who behold it.”

To address the urgent crisis, Francis calls for political action, and encourages individuals not to underestimate the impact of a conscientious lifestyle. He invokes scripture while envisioning a world that reflects the glory of its creator as humans care both for the environment as well as one another, especially the poor. Standing in the way of this vision is are “obstructionist attitudes,” which “even a part of believers, can range from denial of the problem to indifference, nonchalant resignation or blind confidence in technical solutions.” The Pope condemns the spirit of pride that refuses to acknowledge a principle higher than the self, as well as the relativism and materialism that leave people ethically bankrupt to attempt change. Quoting Pope Benedict XVI, he says:  “When the human person is considered as simply…the product of chance or physical determinism, then, ‘our overall sense of responsibility wanes.'” Writing in an age when materialistic scientism is the dominant school of thought among intellectuals, he articulates a highly relevant truth: “even if we postulate a process of evolution…our capacity to reason, to develop arguments, to be inventive, to interpret reality and to create art, along with other not yet discovered capacities, are signs of a uniqueness which transcends the spheres of physics and biology.”

While I personally agreed with the vast majority of the Pope’s points, I had trouble with his call for a world authority to enforce international compliance with environmental standards. The Paris Agreement of December 2015 seems to me a better model, in which world nations voluntarily committed to some of the necessary measures. No doubt the extraordinary response in Paris among virtually all nations was in part due to the Pope’s influence.

In any case, Francis’ letter to the world deserves our respect, and his call for change, the ongoing commitment of those who call this earth home.